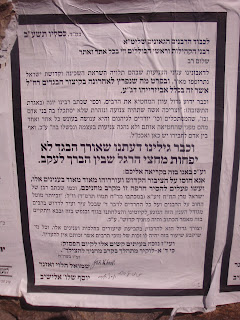 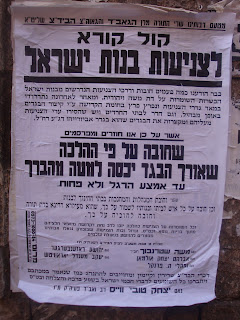 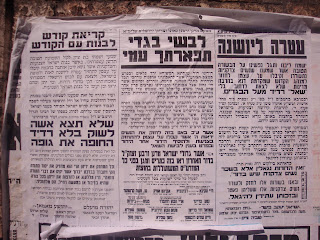 There have been many signs put up all over the Mea Shearim area of Jerusalem expressing the calls from many of the Gedolei Yisrael for more modesty﻿.

The first one which is signed by Rav Elyashiv and Rav Vosner reads as follows:

To our great sorrow, matters of modesty on which the resting of the Shechina (Divine Presence) and the holiness of Am Yisrael are dependent on have fallen greatly. Specifically in the areas of shortening the length of the clothing which is a precursor to immoral and forbidden relations.

The severity of causing others to sin is already known, as Rabbenu Yonah writes in Iggeret Hateshuva,
"A woman has to be modest and cautious to not cause others to stare at her (attracting attention to herself) etc. And those who stare at her will descend down to Gehenom and in addition she will receive the same exact punishment as each and every single one of them for it was she who caused them to sin by not being modestly dressed, and she was a stumbling block to them."

We have already made our opinion known that the length of a skirt must come down to at least halfway between the knee and the ankle.
They then go on to say that it is very important now more than ever to spread this information and even set up learning groups where the laws and attitudes of modesty are learned.

The second sign is pretty similar in nature and the third one makes many praises to women who have taken on the original custom of the previous generations and are following the Rambams ruling that a woman should not go out into the public areas without putting on a covering (shawl) over her body.

G-d willing with the increase of modesty we will be saved from all types of terrible tragedies in Am Yisrael and we will cause a greater dwelling of the Divine Presence amongst us.
(end of translation)

Think about it ladies, when you wear those tight and stretchy skirts and tops, do you not realize that the whole world can clearly see the shape of your behind and chest!?
Are you not ashamed to walk down the street with your behind showing!?
Have we lost all our human dignity!?

Rav Shalom Arush recently said in one of his lessons that when there is no modesty there is no shmira (protection from Hashem). Many wonder why there are so many terrible things lo aleinu going on in our streets and in our neighborhoods. Well I think we have our answer. When we abandon holiness, than G-d leaves us out of His protection.
May we all merit to strengthen ourselves in modesty and holiness and may all the holy women who decide to take on more modesty be blessed to see clear and open miracles in her and her families lives.

It is a big mitzva to pass this information on to others. All those who bring merit to the many will be blessed with righteous children, amen.
Posted by Yehoshua Goldstein at 11:50 PM