The City of Diamonds 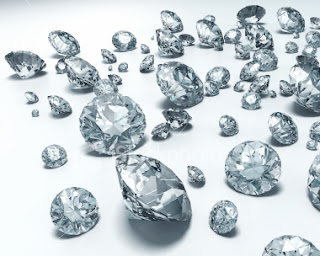 There was a very poor man who was told that somewhere on a far off island there existed a city of diamonds.
Seeing that he had no other choice, he packed up a few of his belongings, said goodbye to his wife and kids and set off on the journey.
After a long and difficult journey, he finally discovered the island with the city of diamonds. After collapsing on the diamond covered shore, he grabbed a handful of diamonds and stuffed them into his pocket. Before collecting more diamonds, he realized that he had not eaten in many days, so he staggered into a restaurant and ordered a large filling meal. When the bill came, he reached into his pocket, placed a diamond on the table and told the waiter to keep the change. The waiter started to laugh and said, "Surely you must be joking, over here these stones are of no value, here our currency is potatoes. In spud we trust!"
The poor man was in shock and didn't know what to do. The manager of the restaurant had him wash dishes to work off his bill. He worked hard and was offered a permanent job as a dishwasher which he accepted. It was not long before he moved up to becoming a waiter and because of his hard work and diligence, he eventually became the assistant manager. At this point he was earning a good amount of potatoes every month and he was feeling very good about his turn in fortune. Soon the old manager confided in the poor man that he wanted to retire and leave the restaurant over in his hands. The poor man gladly accepted and continued to grow more and more successful until he owned many other restaurants and businesses and he soon became the wealthiest man on the island.
After many years, he remembered his poor wife and kids and how much they all must be suffering and missing him, so he hired a giant ship, packed up all his millions of potatoes and set sail for the long journey home. Upon his arrival home, he greeted his wife with a big smile and open arms and said, here I am and we are rich, I have millions of potatoes in the boat. Now by this time, all his potatoes had gone rotten and turned into a stinky putrid mush. His wife clobbered him over the head with her purse and shouted at him, "You fool, you were supposed to get the DIAMONDS, what good are all these lousy rotten potatoes."
The poor man sunk into despair and he cried and cried over his terrible misfortune. Meanwhile, the wife being a true woman of valor started sifting through the rotten potatoes with the hope to salvage a few good potatoes to boil in a stew. In the corner of the boat she found a sack with her husbands' old clothes and she decided to take them to wash. In the pocket she felt a few lumps and to her surprise and great excitement, she discovered a pocketful of diamonds. They were able to live happily ever after...

Before our soul enters into this world, we are very clear on our mission: To gather as many diamonds (Torah and Mitzvot) as possible. When we get here however, we are constantly mislead and persuaded by the world into believing that the real currency is dollars or shekels or gold or whatever other toys and gadgets they make us desire.
How sorry we will be after we return home from our long journey here in this world only to discover that all our money and physical possessions are worth nothing more than rotten putrid potatoes and have no value at all in the spiritual world. How fortunate we will be if we have even a few diamonds to take with us back home...
Posted by Yehoshua Goldstein at 2:09 AM