Memories of a Shochet - Horror Stories from Various Slaughterhouses Across America 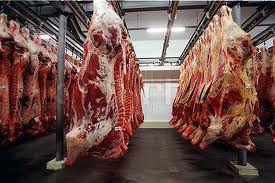 If you really want to get an idea of what is going on in the field of Kashrut, specifically of what really happens in the slaughterhouses, then you need to give this article a read.
Email hazakweematz@gmail.com for the full free book "Memories of a Shochet".
In it, the Holminer Rebbe who was a practicing Shochet in America for 10 years and involved in Kashrut for many more years writes a list of firsthand accounts of some of the horror stories he personally witnessed in many many slaughter houses all across America. You can only imagine if it was like that then, how much worse things are now...

Here are a few excerps to help you get a better understanding of what shechita is all about. Also available is a book the Rebbe wrote entitled "The Gate of Kashrut" with tons of valuable information on the subject of how to truly keep kosher and avoid the many pitfalls out there and thereby save your and your families souls from the blemish of eating treifot and nevelot, chelev and dam.

(From "Memories of a Shochet") In this book I bring forth incidents pertaining to the status of Schita in New York and other locations that I myself have seen and experienced personally, being a Schochet for over 10 years, witnessing first hand the situation in beef and chicken slaughter houses under the finest and strictest supervision.
In the course of 35 years (5727-5762) I have visited the many notable slaughter houses and unfortunately, have witnessed all that is written in this book.

GENTILES SLAUGHTERING TURKEYS AND TAGGING THEM KOSHER, THE OWNER IS AN
ISRAELI MURDERER. SHOCHTIM CROSSING BOUNDARIES OF OTHER SCHOCHTIM
With the Schochtim R'...... and R'........ (two well~ known Schochtim I used to work with near Vineland. There also the Schita was veryquick. But there I only served as a helper to the Schochet, so that the Schochtim were able to rest. I do not remember the exact quantity of the Schita but it was very quick. The knives were defective because they had to slaughter up to the back of the neck, and they used to cry
aloud “cut deeper, deeper”. I used to yell back that I can't slaughter any deeper because I am afraid the back of the neck will defect the knife. After touching the back of the neck you must check the knife
over 6 different ways. The experienced Schochet told me, "Don't worry about the knife. The back of the neck causes no defect. look at my own knife." I never understood how they weren't ashamed to show me such defective knives!
The son in law of Rabbi...... Was a Mashgiach and told me that one day the owner told him that because there was a big snow and the truck of turkeys did not arrive, there will be no Schita, and there is no need
for him to come to work. The Mashgiach was then in a hotel only a few miles away and being a heavy person, he was immune to the cold and never wore more than a sweater. Although the owner thought he had to arrive by car, the Mashgiach out of boredom, decided to take a walk and he walked towards the Plant. When he arrived, he was shocked to see how turkeys were being butchered and kosher tags put onto them, without a Schochet! The owner threatened him that if he reveals what he saw, someone will
shoot him. The owner himself carried a gun on him. He was a former Israeli soldier and was suspected of being an underworld criminal. The Schochet kept quiet and did not tell anyone the story; however he did
tell it to me... This was a long time after I stopped being a Schochet and where I once worked as a Schochers helper for 6-8 weeks.
One time I didn.t feel well, and I sent the Schochet R'....... to substitute for me. The supervising Schochet R'....... saw the Schochet slaughtering in back of the neck and asked him to stay on and work there instead of me. He would receive $60 a day and only have to work two days a week. This particular Schochet stayed on and a week later told me that he had my job. I asked him how he could do this and showed him the Halacha regarding crossing boundaries'. Then he presented this to the Supervisor, the Supervisor in return said, 'With me there is no such thing as crossing boundaries. I hire and fire who I please, and I prefer those that accomplish the most' (slaughter the most animals per hour). And with that I resigned from this Schita.

SLAUGHTERING OF ANIMALS AT 60 PER HOUR-SLAUGHTERING WITHOUT
FEELING-USING A DEFECTIVE KNIFE-IN OUTSIDE EXAMINATIONS THE ADHESIONS
ARE CUT- THE SCHOCHTIM ARE VERY LENIENT AND PERMIT EVERYTHING
I was at a relative who was a Schochet and although I was already experienced in Schita I said that I still knew nothing and am learning the trade. This way I was able to see and observe all that was going
on without being suspected of having too much knowledge. I had very nice knives, and my friend R'...... had also R'...... were impressed with the knives, which are actually the basis for a good Schochet. They told me that if I saw knives with defects I was not to say anything about it. There were two Schochtim - one a Hassid of Rebbe M.....and the other a Lithuanian. The Schochet who was a Hassid showed me his knife that was very smooth but in the middle had a terrible defect, but I said nothing. In short, my relative the Schochet slaughtered only 60 per hour and examined his knife after every animal. He then gave me the knife to examine and I told him I still have to learn what is called fat, in the middle of slaughtering the animals from Schita to Schita you feel fat if it is not a defect. He examined the knife and then showed it to me. Once I found a defect and I said that I felt some- thing and maybe it is just fat. He examined the knife quickly and said it was good. He continued to slaughter another 5-6 animals and gave me the knife again to examine. I told him again that I feel something, and when he examined it again he agreed that there was a defect on the knife and accordingly declared the animal treif. I told him that the first time he gave me the knife to check, I also felt the same defect and he asked me why I didn't tell him. I said I did but that I didn't quite know the difference between fat and a defect and I only said I feel something.
To tell the truth, I felt the defect very well because I was in many slaughterhouses, but I wanted to see how I would feel slaughtering 60 animals an hour alone. Is there feeling and how? The Schochet continued to Shecht without another Schochet standing by his side examining the knives.
Internal examinations are made while the animals are hung. Each examiner makes notes for himself as to what he has found and passes it on to an outside examiner that has nothing to do with the Schita. It is all done in a carefully planned manner. The examiner R'...... permitted everything that had an origin with Rabbinic authority, even when it tended towards the lenient. He removed the most difficult adhesions that even had a blood clot that every Posek would prohibit. I asked him why he is trying so hard to remove it when the animal is treif anyway. and he said that it is absolutely not so and then told me there is a technique called Bais David. that determines that in such a case it is also considered kosher. He showed me the Sefer and told me it was his job to find permits even if the majority rules against. This he declared Glatt Kasher Lemehadrin.. The work on the lung took 15 minutes. I learned from him how to remove adhesions,( He put all the pious Schochtim in his little pocket). Most of our Schochtim don't even know how to remove adhesions, they just tear them and they don't even have nails to do that. Well. that plant already burnt down and thank G-d there is one less place to cause Jews to eat Treif and vile meat.

SCHITA ON THE FEATHERS – THE SCHOCHET ADMITS THAT HE CONTINUES TO
SCHECHT EVEN AFTER FINDING A GREAT DEFECT
Unfortunately, I taught schita to a student, following the instructions of the Satmer Rebbe ZTL. The student was a difficult one and it was harder for himto learn than the knife used to schecht. Then, to my good fortune he was ordained and he started to schecht.
At....... a Schochet was absent and the manager in charge, the old Schochet R'......, took my student to shecht for him. He did not know how to schecht like the others. One time I saw how he slaughters on
top of the feathers, like that other Schochet who gives others treifus to eat..... This caused me great anguish, since he was my student and no less according to the Satmer Rebbe.... On the fourth or fifth day
that he worked there he showed the knife to the old Schochet. He found a great defect. He asked him when it happened, and the student said it happened about an hour and a half ago. Then the old Schochet yelled at
him why he waited so long if he thought something was wrong - why didn't he show it to the more experienced there...... However, inspite of all this, that entire Schita still remained kosher!
Posted by Yehoshua Goldstein at 1:11 AM